Mark showed us his circular motion practicum: He has a flying cow toy, which he suspends from the ceiling. After he gets it moving, he measures the radius of its motion using a pair of meter sticks (one along the ceiling, the other held vertically above the cow to mark the radius on the ceiling ruler). Then he times a few revolutions, counting aloud. Finally, he turns the cow off and measures the length of the string holding it up. The question for the students is: given the radius and the length of the string, what is the time on the stopwatch?

After a short break, we charged on into Energy. No one has any idea what energy is, but it's an enormously useful concept. We had read Feynman's Dennis the Menace analogy for homework (which Craig gives his students on the first day of classes) and then played with the Energy Skate Park simulation: 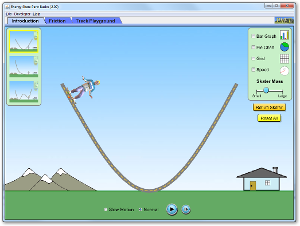 Then, we did two worksheets and whiteboarded them, coming up with some great questions to ask students and ways to link back to previously discussed concepts. Shirley talked about her school's Grand Prix rubber-band car race and some ideas for using rubrics to convey the different levels of mastery. Mark shared an awesome analogy for dissipated energy involving tripping and spilling a huge sack of quarters into the Hudson River: you could send divers after the quarters, but that would cost more than the value of the quarters themselves.

After our qualitative discussion, we talked about developing a common terminology and notation. For the workshop, we're using Emode for all energy, to emphasize that "energy is energy is energy". Last year, several students had trouble distinguishing between an 'E' and a 'Σ', so I was happy to use Kelly O'Shea's notation instead. This year, I'll see what the text uses and hope I can get my students to draw a proper Σ...

After that, we started the suite of labs that will (so Mark and Craig tell us) show us how to count our energy blocks. Tomorrow we'll finish the labs and discuss Swackhamer's Making Work Work. I'm looking forward to talking about how to fit energy flow diagrams into LOL diagrams and relating those to interaction diagrams/system schema and the system designations we did for the qualitative worksheets.

(In case anyone's curious, I made four pages of notes today, plus writing notes on four worksheet pages.)
Posted by jsb16 at 10:48 PM 1 comment:

Today was a bit of a blur: We zoomed through both projectile motion and circular motion. I'm working up my store of questions to ask students when they present whiteboards, along with potential modifications to the standard problems and labs. Watching Mark's patter as he leads us through the labs is really fun. I hope to be half as good as he is within the next five years.

Some standout (but not necessarily new) ideas:


There was some debate about whether tangential velocity increases when you increase the centripetal force and radius is free to change, or if it just looks faster because the angular velocity increases. Anyone know?
Posted by jsb16 at 10:16 PM 2 comments:

Side note: Making notes with an eye towards blogging about the day's discussions has helped me reflect even when I don't get around to writing the blog posts. I highly recommend it.

"Imagine you couldn't give the test at the end of the unit, but had to wait until a year later. What would you teach, and how would you teach it?" Mark Schober started us out today with that quote from a sponsoring professor from another workshop. I don't know about you, but I don't think I'd teach the way I was taught. Sure, I remember some ideas from my high school physics class, but a) I was really interested and b) I've used those ideas quite a number of times in the decades since.

Commuting rather wrecked my brain last week. I don't know how people who commute over an hour every day stand it: there's no time left for anything else, and attempting to shoe-horn in homework after hanging out with my daughters left me severely sleep-deprived. I'm going to try to do homework on the train this week, which might work better than doing homework on the bus last week. (Not that that's difficult, mind you, since drawing graphs on a bus is practically impossible.)

I confess I was late to class today. In my defense, I'm not in charge of NYC buses or traffic on the George Washington Bridge (just in case there was any confusion on that point). So I missed the lead in to the whiteboard meeting discussing the Measurement & Graphing station lab. Fortunately, I didn't miss the discussion itself.

Today was the first day of the Modeling Workshop graciously organized by Fernand Brunschwig and PhysicsTeachersNYC. After getting up way too early and catching two buses, I found my way to the site. (It's a little odd to be walking into the buildings on the north side of 120th instead of the ones on the south side of 120th. I will have to squeeze in some time to visit some of my college haunts.)